Sean Sherk Injured, Out of UFC 108 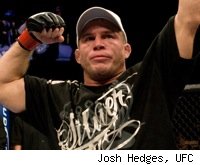 The seemingly cursed UFC 108 event has suffered another loss, as veteran lightweight Sean Sherk has been forced to withdraw due to an undisclosed injury, according to The Northwest Times of Indiana, citing a source in Sherk's camp.

Ironically, just last week, Sherk had been promoted from a matchup with Rafaello Oliveira to replace the recently injured Tyson Griffin in a bout with Jim Miller.

This is the second straight fight Sherk has had to withdraw from; he was previously pushed out of a UFC 104 bout with a shoulder injury.

The 36-year-old former UFC lightweight champion is 33-4 in his career and most recently dropped a unanimous decision to Frankie Edgar.

He will reportedly be replaced by Duane "Bang" Ludwig, according to a report from MMA Weekly.