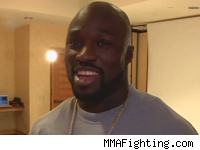 "King" Muhammed Lawal is looking to make an impact in Strikeforce debut on Saturday night against Mike Whitehead, and if you've seen any of his previous five professional MMA fights, you would have to think that Lawal is planning on stealing the show before, during and after his fight.

MMAFighting.com spoke to Lawal about his debut and how he plans on defeating Whitehead this weekend. The full video interview is below.