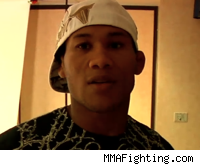 Ronaldo "Jacare" Souza isn't very well-known in the United States, but should he defeat veteran Matt Lindland in impressive fashion on Saturday night at "Strikeforce: Evolution" his stock will not only rise in the eyes of American MMA fans, but he will also instantly become a middleweight title contender.

MMAFighting.com spoke to the Strikeforce newcomer about facing Lindland for a second time and the rumors that some Strikeforce competitors turned down fights against him. The video interview is below.