Gray Maynard: One Win Away From B.J. Penn? 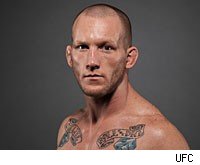 The big question coming out of UFC 107 was whether the UFC can find anyone who's a legitimate challenger to lightweight champion B.J. Penn.

Gray Maynard has a chance to provide an answer to that question at UFC Fight Night 20. If Maynard beats Nate Diaz in the Fight Night main event, here's the basic case he can make that he deserves to be considered the UFC's No. 1 lightweight contender:

-- He'll have an official record of 8-0-0, making him one of only a handful of UFC fighters with a perfect record (albeit a perfect record that includes a no contest and excludes a loss on The Ultimate Fighter).
-- He'll have avenged that Ultimate Fighter loss against Diaz.
-- He'll have won two straight fights that were televised by Spike, which raises his name value.
-- He'll be generally recognized as the highest-ranked UFC lightweight who hasn't gotten a shot at the title yet.
-- He'll be able to say he has the wrestling chops to take Penn down, something that has been almost impossible for anyone at 155 pounds.
-- He'll be able to say he has a strength and size advantage over Penn, as Maynard walks around a few pounds heavier than Penn.

Not convinced? Well, neither am I -- I really don't think Maynard has much of a prayer against Penn. But someone has to challenge Penn for the lightweight belt. If Maynard beats Diaz, his caes is as strong as anyone's.