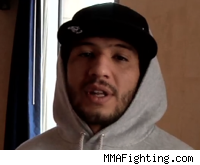 From the moment he lost his Strikeforce lightweight title to Josh Thomson in June 2008, Gilbert Melendez has been extra motivated to avenge the loss. 18 months and two dominant wins later, "El Nino" will get his chance on Saturday night at "Strikeforce: Evolution."

MMAFighting.com spoke to Melendez about having to wait longer than expected to get his rematch, how he has matured as a fighter since the loss and working to get the respect he thinks he deserves in the MMA world. Check out the video interview below.