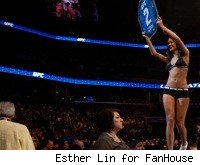 Former Octagon Girls Logan Stanton and Natasha Wicks, two of the more popular figures in the UFC, were relieved of their duties on Tuesday, surprising MMA fans when the news was first reported by MMAMadness.com on Thursday.

Wicks, who won a Maxim Magazine Octagon Girl search in July, was released before the expiration of her contract, while Stanton, who made her Octagon debut at UFC 92 last December, did not have her one-year contract renewed.

The news came as a shock to both women who figured they were a part of the UFC's long-term plans.


"I hadn't heard anything from anybody," Stanton told MMAFighting.com on Thursday. "They were promoting me and I was in the video game for next year, so I didn't think anything of it. I assumed that they were just going to renew my contract for at least another year."

Stanton said she received a call from a UFC executive on Tuesday, informing her that her contract would not be picked up for another year.

"I was like, 'Wait, what? Are you breaking up with me?,'" Stanton said jokingly. "It totally took me by surprise. Natasha actually texted me a little bit before I got the phone call. She was like, 'The UFC just dropped me,' and I was like, 'What? Why?' I was confused about that. So when he told me he had bad news, I was like, 'Oh, I already know.' And then he pulled that one on me. And I was like, 'Wow,'

"I was kind of in shock at the time. I even said, 'Ok, thank you. Bye.' I was lame. I just said thanks. I really didn't know what to say to him. I was kind of upset for a minute. I teared up. And after that, I just became a little angry." 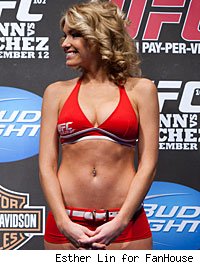 Rumors have circulated online that the reason behind Stanton's and Wicks' dismissals was due to both girls insinuating in a RawVegas.TV interview that Josh Koscheck faked an eye injury during his UFC 106 fight against Anthony Johnson. However, Stanton, a 21-year-old professional model from Florida, doesn't think those comments had anything to do with her contract not being renewed.

"I don't believe that. And actually nobody has ever confronted me about the interview or told me that I couldn't say anything about the fighters. I honestly think that they just wanted a new face. They want new girls, probably more fitting girls. Somebody who fits that ring girl stereotype with the big boobs and what not. So I just think they want fresh faces and probably somebody a little older and, I don't know, ring girl-ish," she said.

"I think it was a very last minute decision that nobody was informed on, because up until the very end, they've been having me do shoots and the video game and everything. So I don't know why it happened."

MMAFighting.com contacted the UFC for a comment, but didn't hear back.

The organization has not officially announced that Stanton and Wicks are no longer working as Octagon Girls, but their bios have been taken off UFC.com.

Arianny Celeste will reportedly remain an Octagon Girl, while MMA Madness also reported that former Playboy model Chandella Powell has been hired to replace Stanton and Wicks. If so, she will most likely make her debut at UFC 108 next month.

Stanton, who worked at UFC 107 in Memphis last week with Wicks, repeatedly said that she holds no ill will towards the organization, but did categorize her dismissal as "very unprofessional."

"I kind of think they don't hold any loyalty to anybody. Just to come straight up with nothing leading up to it? They didn't give me any warning; they didn't tell me why."

When contacted by MMAFighting.com, Wicks simply replied, "I am honored to have been given the opportunity and I had fun."

She also added: "I mainly want all the fans to know how greatly I appreciated their support."

Stanton, who had never worked in MMA prior to landing the Octagon Girl job with the UFC, said that she would like to continue working in MMA and would be open to working as a ring girl for another organization.

"I love this sport. Towards the end, I really started to get into the sport and the fights and I was having a blast. I love being in that world. So we'll see what happens from here," she said.