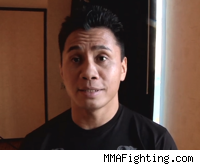 There was a time when many MMA pundits predicted that we would never see Cung Le compete again. After all, the 37-year-old former Strikeforce middleweight champion was fielding lucrative movie offers from Hollywood studios and didn't seem to be motivated to return to the sport.

But on Saturday night, Le will return to the cage against Scott Smith in what promises to be a hard-hitting affair. MMAFighting.com spoke to Le on Thursday about why he chose to come back, how he expects to defeat Smith and Jake Shields calling him out recently. Check out the video interview below.