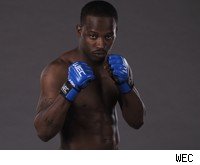 Just before Ed Ratcliff steps into the cage against Donald Cerrone on Saturday night in the main event at WEC 45, there's one person in the crowd he'll want to find: His mom.

Ratcliff's mom is a karate and taekwondo black belt and was the first person to get him interested in martial arts, but it took her a while to buy into MMA, which she viewed at first as too brutal for her little boy. She's come around, though, and on Saturday, she'll be there to watch him fight in person for the first time.

In an interview with FanHouse, the 26-year-old Ratcliff talked about his mother's influence, and where he wants his career as a professional martial artist to go. The full interview is below.

Michael David Smith: How did you get into martial arts?
Ed Ratcliff: My mom started in karate when she was in high school, and when I was born she was really involved in martial arts so it was just a natural thing that she brought me with her. I had cousins who got into it as well and we were like our own little martial arts team in the house but I was the only one who really stuck with it.

How old were you when you started?
I've done karate and taekwondo my whole life. There was never a time in my life when I wasn't into martial arts.

What made you decide you wanted to move from the more traditional Eastern martial arts into MMA?
The problem for me was in karate tournaments, point karate, especially before you reach the black belt level, you're supposed to pull your punches. But I was always very aggressive and wanted to hit, and it would frustrate me because those karate tournaments were more about slapping and running away. I got disqualified three or four times for excessive contact, and then when I saw the UFC I realized there was a chance for me to keep practicing my martial arts but get to do the full contact that I wanted.

When did you see the UFC for the first time?
I saw UFC 2 at Blockbuster and told my mom about it and she didn't want to rent it at first. She took a look and said, "that's redneck garbage" but I finally convinced her to rent the video for me.

Does she like MMA now?
Now she likes MMA because she'll support anything I do. She's learning more and she understands it now, and she loves martial arts.

Are the fundamentals of karate and taekwondo that she taught you important to where you are as a fighter now?
People ask me if karate or taekwondo is my base and what I say is my base is my brain. My base is studying martial arts, period, not taekwondo or karate or whatever. You have to be flexible enough to take what works from any martial art.

Among MMA fighters with karate backgrounds the best known is Lyoto Machida. Is his style similar to yours?
Not really. He uses some of the same stances I use but I think we're very different fighters. He's much more of an elusive fighter than I am.

How would you describe your fighting style to fans who haven't seen you before?
Get ready for some fireworks. I'm in this to win fights and also to be a spokesman for karate. There was a time in MMA when we had a bad name -- people would be like, "Oh, you karate dudes, you can't really fight" -- but I'm showing that you can do it.

What was the process like for you to transition from a karate student to an MMA fighter?
I started doing some research when I was in high school, to find out what it would take to get into MMA, and I knew I wanted to train with the best. At that time that meant either Royce Gracie or Ken Shamrock. I liked Ken's style a little bit more because I thought it was more of a flexible style: Gracie jiu jitsu felt like it was more restrictive and I liked the more open style of the Lion's Den, where Ken Shamrock was. So I found out he was having tryouts, I tried out for the team and I made it.

What's Ken like as a coach?
Ken is a normal guy. I know a lot of people have certain ideas about him from what they've seen in the WWF or the UFC but to me he's just a good coach. The sport has evolved since then, and I don't know if his style works as well now, but for me just getting started then, he was tough. I took a lot of beatings at his gym -- not just from him but also from how hard we had to work. That made me the fighter that I am. That developed my toughness. I won't be broken, mentally or physically, because of what I developed in that gym.

Looking at where your career has gone since then, is it safe to say your fight with Cerrone is the biggest of your career?
Yes. This is definitely the biggest fight of my career. Cerrone has fought for a title and that's where I want to be, fighting for a title, so if I'm going to get a title shot I have to beat him.

What do you need to do to beat him?
I need to be smarter than Cerrone. I need to be more flexible than Cerrone. I think he has a more rigid style and I'm able to adapt and I think I'm going to have an advantage in that respect. I think he's going to come in there with a very specific game plan and I'll be able to change on the fly and adapt very quickly in any situation, and that's what I need to do.

If you do beat Cerrone, where does that put you in the lightweight mix in the WEC?
Winning this fight will make me skyrocket near the top in the WEC. As long as I'm moving north in those rankings I'm happy.

What are your mom's thoughts going into your fight?
She's coming to Las Vegas to watch, and this is her first time ever coming to one of my fights. She never came to any of my MMA fights -- she came to my karate tournaments, but not my MMA fights. This will be her first one.

Will she be nervous? Scared?
I don't know. She never has seen one live in person or on TV -- she's only seen video of my fights after I already talked to her, let her know I'm OK and told her what happened. So this is going to be her first time watching me live.

Is she still an important teacher for you?
As far as karate goes, there's a lot she knows that I don't. I talk to her about techniques, things I want to practice. She'll tell me to work on this or that and she definitely helps me out. Most of all she just wants me to follow my dream -- she wants me to know if you have a dream you can make it happen.