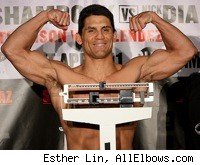 On this week's edition of The MMA Hour, we were first joined by middleweight Jake Rosholt, who was recently released by the UFC following his loss to Kendall Grove. Rosholt, a four-time All-American at Oklahoma State University, admitted that he entered the UFC too early in his career and talked about where he will fight next.

Later in the show, we talked to Strikeforce broadcaster Frank Shamrock about Saturday night's card on Showtime. Shamrock said that he still doesn't watch UFC events and mentioned that he is looking to return to action in early March. Finally, we spoke to "King" Muhammed Lawal about making his Strikeforce debut this weekend and his planned celebration, which will pay homage to pro wrestling great, "Stone Cold" Steve Austin.

Watch or listen to the show below.