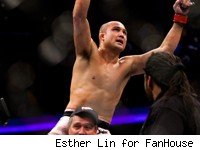 B.J. Penn showed once again on Saturday at UFC 107 that there's simply no one close to him in the lightweight division in MMA.

Penn dominated Diego Sanchez, just as he dominated Kenny Florian, Sean Sherk, Joe Stevenson and Jens Pulver before him. Since a two-fight losing streak at welterweight convinced him to move back down to 155 pounds, Penn has not even been challenged as a lightweight.

So I think you could make a case that Penn belongs at the very top of the list of the best pound-for-pound fighters in MMA. But in my book, he's not quite as high as Fedor Emelianenko (who dominates bigger heavyweights), Anderson Silva (who dominates both middleweights and light heavyweights) or Georges St. Pierre (who dominated Penn himself, admittedly at St. Pierre's weight class).

My latest pound-for-pound rankings are below.