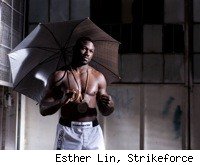 FanHouse has been following around "King" Muhammed Lawal as he prepares for his Strikeforce debut on Saturday night against Mike Whitehead. Watch below as Lawal gets a haircut at a local barbershop, does a photo and video shoot for Showtime, partakes in a fascinating form of leg muscle therapy and talks about the first time he was caught stealing.

Enjoy the video, which was shot and edited by E. Casey Leydon in San Jose, Calif., below.