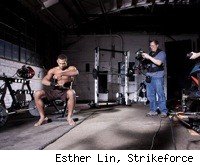 When Ronaldo "Jacare" Souza and Matt Lindland face off on Saturday night's Strikeforce on Showtime card, it won't be the first they've competed against each other. But while Souza submitted Lindland at the 2003 Abu Dhabi Combat Club Championship, it's safe both men enter this fight at different places in their respective and with something to prove.

FanHouse spoke to Souza via e-mail about facing Lindland again, his improved MMA game and his desire to fight Jake Shields for the middleweight title. The interview, which was translated into English by his manager, is below.

Ariel Helwani: The last time you fought in the United States was in May 2007, did you always want to come back and fight here to expand your fan base?
"Jacare" Souza: Yes, I have been waiting for an opportunity to fight in US and it's happening now. I am very happy to be with Strikeforce and for my fight be broadcast live on Showtime. I am ready, and I am looking forward to having a great fight and get my American fans and friends stoked.

What do you think of all the big signings Strikeforce has made of as of late?
It assures me that I have made the right decision signing with Strikeforce. This event will keep growing, and for me it's great because I want to fight the best fighters.

There were rumors that some fighters turned down fights with you because you have such a dangerous style but are not as well known as some of the other guys on the roster. What do you make of that?
Well, I've been training a lot for MMA. I got a great camp, great training partners, and I am making sure I am evolving in all elements. All I want is to fight so I am preparing myself to fight the best. My manager told me that this guy did not want to fight me and also this other guy, so I am not here to pick an opponent. I want to be the Strikeforce middleweight champion, and for that I have to be ready to fight anyone that weighs 185 pounds. That is a champion attitude.

Lindland was knocked out badly in his last fight. Do you think he will return the same fighter?
Lindland is a great fighter and Olympic athlete. I have a lot of respect for him and I know he will be prepared for a war, so it will be a great fight.

What do you think is the biggest weakness in his game?
He is very well-rounded fighter. I believe I got more submission skills, so I will say his ground game will be his weakness.

Lindland has only been submitted twice in his MMA career by Fedor Emelianenko and Murilo Bustamante. Would it be a feather in your cap to be only the third fighter to make him tap even though you have done it already at ADCC?
It would be great, but my goal is go there and fight MMA. If i win by submission or by anything else, I will be happy the same way.

You haven't won since September 2008, do you think about that a lot?
Not really. My last fight was a no contest, and if I was not cut, I would have beat him.

Which part of your game has most improved since your fight against "Mayhem" Miller in May?
I have being training everything, so I will say my hands have improved and I hope i will have the opportunity to show that.

How often do you work on your striking skills?
Six days a week. My coach Josuel Distake is great coach and also I have great training partners like Anderson Silva, Rafael Feijao, among others. So my hands are getting sharp.

Are you still interested in settling your feud with "Mayhem" Miller?
Well, I have nothing to prove. I already won one fight and the second fight everybody knows what happened. Like I said before, it's up to Strikeforce. My goal is to be the Strikeforce middleweight champion, and I do not think I need to fight him to have a shot at Jake Shields.

Have you heard some of the things he has said about you recently, and if so, do you feel he crossed the line?
He does talk a lot -- that is how he rolls. He is a character. I do not care for what he says. If one day I happen to fight him again, I will shut his pipe.

How do you expect your fight on Saturday to finish?
I am focused and prepared. I am looking forward to a great fight and I hope I get the win. It is Showtime!