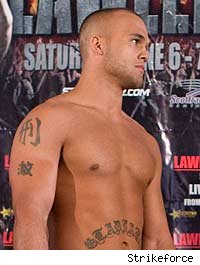 Robbie Lawler will not be competing this Saturday night after all. The middleweight fighter was supposed to face Trevor Prangley on the undercard of Showtime's Strikeforce: Evolution card, but after Prangley was forced to withdraw earlier this week due to an injury suffered during training, the organization was left without an opponent.

Strikeforce tried to find an opponent for Lawler, but FanHouse has learned that they have decided to keep him off the card. The organization is hoping to reschedule him for the upcoming Jan. 30 event in Sunrise, Fla.

Lawler, the former EliteXC middleweight champion, last competed in June, losing via first-round submission to Jake Shields. He has three fights left on his Strikeforce contract.