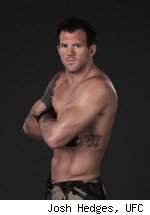 When the UFC and Spike TV agreed to air a couple of free preliminary fights on the September UFC 103 card, it was mostly an attempt to garner the pay-per-view broadcast some attention on the same night that a much bigger boxing pay-per-view show (Floyd Mayweather Jr. vs. Juan Manuel Marquez) was taking place.

But the free preliminary fights proved popular enough that Spike and the UFC have decided to make them a regular feature before UFC pay-per-view shows going forward.

Spike announced Wednesday that it will show 10 live UFC prelim shows before pay-per-view fight cards in 2010. Free fights will be shown before both UFC 108 on Saturday, January 2 and UFC 109 on Saturday, February 6.

Spike averaged 1.4 million viewers for its preliminary shows in 2009 -- a very good audience for Spike -- and the UFC thinks the preliminary shows serve as a good advertisement to get some last-minute buyers for the pay-per-view broadcasts. And more free MMA is obviously great for fans.