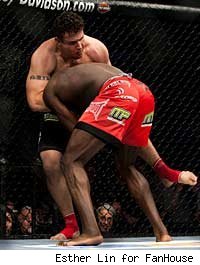 UPDATE: Get the results for Frank Mir vs. Shane Carwin.

With UFC heavyweight champion Brock Lesnar still indefinitely on the shelf, the organization is moving swiftly to create an interim championship.

And fresh off his spectacular win at UFC 107, Frank Mir is being tabbed to face No. 1 contender Shane Carwin to fill the interim title matchup, FanHouse has learned.

The bout, which has not been officially signed but has been verbally agreed to by at least one side, will be featured as the co-main event at UFC 111 on March 27, 2010 in Newark, N.J.

[Update: On Wednesday morning, FanHouse was informed that both parties have now verbally agreed to the matchup.]

Mir (13-4), a former UFC champion and one-time interim titleholder, last Saturday dominated Cheick Kongo, needing just 72 seconds to win by technical submission. Coming on the heels of Mir's UFC 100 loss to Lesnar in July, the impressive performance served to reignite interest in the rubber match of a potential Mir-Lesnar trilogy. Now, it appears that could be a possibility.

Standing in his way is Carwin, who has yet to taste defeat in his pro career, racking up 11 wins. Remarkably, all of his victories have come via first-round stoppage. The 34-year-old former collegiate football and wrestling star vaulted to the No. 1 contendership in March with a knockout over Gabriel Gonzaga.

Carwin had been scheduled to face Lesnar at UFC 106, and then UFC 108 before the current champ was forced to withdraw with a serious intestinal disorder. He also had been offered a fight with Cain Velasquez, an opportunity he turned down because of the event's proximity to his pregnant wife's due date.

Over the weekend at UFC 107, organization president Dana White told reporters that Lesnar's health would be re-evaluated in about 45 days, and that a decision on an interim belt might not be made until then, but now it appears that the company will try to capitalize on Mir's sudden momentum while allowing Carwin the opportunity to get back into the cage for the first time in a full year. In recent days, both Carwin and Mir have voiced their approval of such a bout.

As first reported by FanHouse in November and confirmed by the UFC last week, UFC 111 will be main evented by the welterweight championship fight between challenger Dan Hardy and division kingpin Georges St. Pierre.