Dana White High on UFC, WEC Broadcast Partnership With Versus 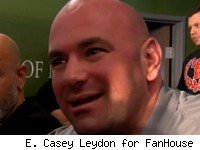 UFC president Dana White dropped in on the WEC 45 media call Wednesday and praised broadcast partner Versus, whom Zuffa recently signed a WEC extension with that will additionally bring two UFC live events on the sports network in 2010.

"I've been talking to networks for a long time now, and I've never come to a deal with the big ones: CBS, FOX, you name it, HBO," White said. "Never came to deals with any of them, because I didn't like the deal and I didn't feel like they were really into it.

The UFC cards on Versus will be similar in star power to the ones on Spike TV, but White plans on starting out with a bang for the promotion's debut on the Comcast-owned channel.

"It will be like a Fight Night card," White said. "But we got some plans right now ... The fight that we're talking about putting on the first fight on Versus. It's going to be a good one."

The first UFC live event on Versus will be the first time a live UFC event will be televised on an national sports only cable network. The UFC and Versus are still figuring out a date and location for the first live IFC event and won't know until early next year. There's also no specific day of the week being planned for the shows.

"I wouldn't say there's one given night, but whatever night we pick is going to maximize ratings," said Marc Fein, Executive Vice President of Programming, Production and Business Operations for Versus.

Despite the UFC and WEC sharing the same network, the two promotions will remain entirely separate. Zuffa's plan is to eventually have WEC join the UFC in the pay-per-view business.

The new multi-year agreement with Versus includes more WEC live events and WEC WrecKage shows, and provides the UFC an extra outlet for its countdown programs used to promote pay-per-view buys.