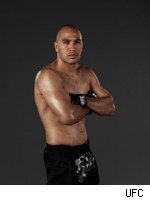 A light heavyweight bout between Brandon Vera and Jon Jones is a possibility for a UFC card in March in Denver, Colo.

Vera posted late Tuesday on his Twitter account that he will fight Jones on March 21, but later deleted the message within a half-an-hour. It appears the fight has been offered to both fighters, but bout agreements have not yet been signed.

Vera lost his scheduled opponent this week for UFC 109 on Feb. 6 when the UFC injury bug latched onto Antonio Rogerio Nogueira, sidelining the top-ranked Brazilian with a fractured ankle.

Jones is coming off a dominant performance two weekends ago against Matt Hamill even though he would lose the bout by disqualification due to ill-advised, illegal elbows.