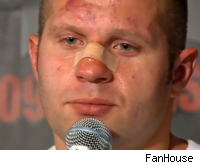 Strikeforce action will return to CBS in 2010.

A CBS spokesperson informed FanHouse on Tuesday that the network will broadcast its fifth MMA event next year, and that it will most likely air during the month of the April.

While no specific date or venue has been made official, Fedor Emelianenko and Dan Henderson have agreed to compete on the card. Their opponents have yet to be signed.

The card will air in its usual Saturday night 9 p.m. ET slot, and will air via tape delay on the West Coast.

Strikeforce's debut on the network aired on Nov. 7, and was headlined by Emelianenko vs. Brett Rogers. The main event drew an audience of 5.46 million viewers, making it the ninth-most watched MMA fight in history.

The show did a 2.5 rating and 4.04 million viewers. It scored a 2.3 rating in the males 18-34 demo, beating ABC's regional college football programming head-to-head.

Strikeforce's next show takes place this Saturday night on Showtime, headlined by Cung Le vs. Scott Smith. The organization also has a show scheduled for Jan. 30 in Sunrise, Fla., which will feature the Strikeforce debuts of Herschel Walker and Bobby Lashley.

No other information has been available regarding the next Strikeforce event on CBS, but Frank Shamrock mentioned on this week's edition of The MMA Hour that he was hoping to return on the next CBS telecast.