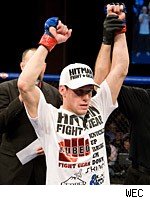 The WEC officially confirmed the news in a press release.

Bowles (8-0) began his title reign with an August first-round upset knockout over long-reigning champion Miguel Torres.
Bowles has yet to go to a decision in any of his eight professional fights, and has only been so far as the third round once.

Cruz (14-1) has won five straight bouts since dropping to bantamweight following a submission loss at the hands of former champion Urijah Faber in a featherweight championship match. In his most recent fight, he handed Faber's training partner Joseph Benavidez his first loss in a unanimous decision.

The event, which will take place during the weekend of Columbus' massive Arnold Sports Festival, will be held at Nationwide Arena. It will also feature the returns of Torres as well as MMA legend Jens Pulver.

Torres (37-2) had won 17 straight fights until being KO'd by Bowles. Still, his overall record stands as one of the best in MMA history.

Pulver (22-12-1), meanwhile, will be returning for his first bout in nine months. In October he revealed to FanHouse that he'd seen a psychiatrist for the first time and had been diagnosed with anxiety and depression. After being treated with medication, the former UFC lightweight champion planned to return to competition with a clear head.

Opponents for Torres and Pulver have yet to be named.