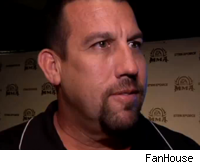 Those hoping to see "Big" John McCarthy ref an MMA match in the state of Nevada soon will probably have to wait a while.

FanHouse recently spoke to Keith Kizer, the executive director of the Nevada State Athletic Commission, about McCarthy's status in the state, and it appeared as though the commission was in no rush of reinstating arguably one of the greatest referees in MMA history.

"We have him and about 40 other people pending. It's just a matter of when there's the next opening and then we look at the applications and go from there," Kizer said.

McCarthy retired from refereeing in December 2007 to pursue a career in television. During his time away from the cage, he criticized some of the decisions made by the NSAC with regards to judging and officiating, and some believe that is why he has yet to be reinstated by the commission.

In March, McCarthy told Sherdog why he felt the need to criticize the commission during his time away from refereeing:


When asked if McCarthy's past criticism of the NSAC will come into play when his application is being evaluated, Kizer simply stated: "I don't know."

McCarthy, who is currently licensed to work in California, Ohio, Utah, and jurisdictions in Canada, applied for reinstatement on Sept. 10. He is the most famous referee in the sport and still one of the most well-respected. In a time when officiating has become a hot topic in MMA, one would think the most powerful commission in America would jump at the chance to bring him back. Apparently not.