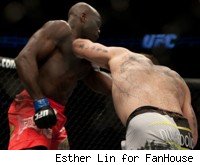 Versus, home of the WEC since June 2007, will begin carrying live UFC events in 2010 as part of a renewal agreement with Zuffa that will bring a total of seven WEC and two UFC events live to cable sports network next year, according to VERSUS.com.

Spike TV had previously been the exclusive cable channel for the UFC and the first UFC on Versus event will be the first time the UFC has aired an event live outside of Spike TV since the two partnered for The Ultimate Fighter in 2005.

Details of the first UFC event on Versus are to be announced.

The new agreement, which will also allow Versus digital media rights to stream preliminary WEC fights on VERSUS.com, can essentially put to rest rumors of Zuffa folding the WEC and sending its fighters to the UFC at least for the near future.