Gilbert Melendez: I Have to Bring My 'A' Game Against Josh Thomson 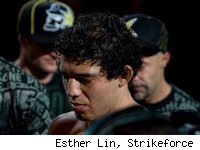 When Gilbert Melendez came to defend the Strikeforce lightweight belt against Josh Thomson in June 2008, he was entering the cage for the fourth time in nine months.

It was a heavy rotation for the Cesar Gracie fighter, especially considering that there was a nine-month stretch prior where he wasn't booked for any fights.

With a less than desirable level of motivation, Melendez did the best he could in pushing himself through a full training camp.

But it wasn't enough as Thomson proved to be the better fight that evening, controlling Melendez through five rounds with efficient striking, frustrating front kicks and better wrestling.

While Melendez was initially frustrated with Thomson's withdrawals due to injuries and the reduced fan interest as a result, Melendez believes the delay has benefited him otherwise.

"I feel like it was a blessing in disguise that the fight is now," Melendez said last week in a conference call. "Of course, you never wish an injury on anyone and Josh is such a great guy, but the fact that it happened twice has allowed me to even get that much better. Those two fights I had were maybe what I needed to build up to Josh and rightfully earn a rematch for the title."

Melendez won his next two fights by TKO en route to the interim belt, preserving the relevancy of a Thomson rematch. Now he's fully motivated to unify the Strikeforce belts and learn from his mistakes in that loss.

Melendez, who entered the 2008 fight against Thomson with a record of 14-1, was considered one of the top 10 lightweights in the world and the favorite at the time (and still today) to beat Thomson.

"More than anything I just want to perform better than I did last time," Melendez said. "I think Josh is right. I am a different man. It's been a year-and-a-half and it's almost been two years. It's also been two years for Josh so I know he's a better two-year fighter as well."

At the professional level there is no room for mistakes and Melendez accepts the loss with a better understanding of the work ethic and mentality it takes to keep his hand raised.

"Josh was the better man," he said. "I have no excuses. He trained harder. He put the time in and it showed out there. And hopefully this time it's a different story."