After Full Decade of Superstardom in MMA, BJ Penn Hitting His Prime 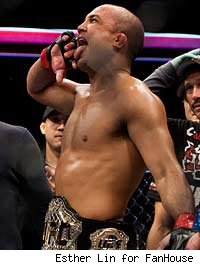 MEMPHIS – Perhaps with the passage of time, we'll one day look back and truly understand just how great BJ Penn was.

That's not a realization that can come from one, specific win -- even one as dominant as his fifth-round TKO against Diego Sanchez at UFC 107. Instead, it comes as a compilation of history.

Here's a brain-teaser for you: try to think of another MMA fighter who was relevant at the beginning of the '00s, a contender throughout the decade and still at a championship level entering the '10s.

The only acceptable answer is Penn. Randy Couture is 3-3 in his last six fights; Matt Hughes is only 2-3 in the last three years; Georges St. Pierre got a late start this decade; Fedor Emelianenko was little known in the MMA world until his Nov. 2002 PRIDE debut – nearly three years into the decade; Vitor Belfort had several down years in the mid-'00s.

Penn, meanwhile, was "the Prodigy" from the beginning, delivering on the big expectations always surrounding him. Originally considered a jiu-jitsu specialist, he showed his well-rounded game from the beginning, with three straight knockouts to start his career.

The knock on Penn was always his motivation. In fact, he was always motivated to do great things, just not to put in the work necessary to accomplish them. Time solved that. As the clock on his youth ticked away, Penn was embarrassed for the first and only time in 2006, when he was crucifixed by Matt Hughes after gassing out and TKO'd due to strikes.

Thus began the rebirth of Penn, who has looked like a world-beater at lightweight since then. The blips on his 15-5-1 record will always bring with them detractors on his history, but the record will also show that most of those losses came to all-time greats like Hughes, St. Pierre and Lyoto Machida while moving up in weight class. To date, his only loss at 155 pounds came to Jens Pulver, and two of the decisions he dropped in his career -- including the Pulver loss -- came in controversial fashion.

But the most amazing thing about Penn is the second surge in his career. Everyone always knew he had the talent, but when he began to put in the time, he found another level. In his last five lightweight fights, not one opponent has managed to go the distance with him.

Sanchez came the closest, surviving into the fifth before a doctor stopped the bout due to cuts.

"You know what? This happens. He's a great champ," Sanchez said afterward. "This is the best BJ to step in a ring. I did my best, but I didn't end up on top."

Penn's beatdown of the tough-as-nails Sanchez was so complete it bordered on cartoonish. Going into the fight, Sanchez (21-3) had never been stopped or even knocked down in a fight. Afterward, those two prideful points could no longer be repeated.

Penn knocked him down in the first round and spent the rest of the fight's 23 minutes punishing Sanchez anytime he got within striking distance. At the conclusion of Penn's epic performance, Sanchez looked like he'd been attacked by a mob. He left the cage with a lip split in two places, a deep gash on his forehead, a swollen left eye, a suspected broken nose and assorted cuts. He was immediately taken to the hospital for observation.

"I've been doing this for 10 years, and I don't think I've ever seen a guy as beat up as Diego was tonight," said UFC President Dana White afterward.

According to FightMetric.com, Penn landed 150 strikes to Sanchez's 8. That is not a misprint. Final striking stats were 150-8.

From that, we learn two things: 1) Sanchez's heart should never be questioned, and 2) Penn is clearly on a level all his own as a lightweight.

As the days tick down on this decade and we move on to 2010, it seems obvious that Penn -- who turned 31 in the wee hours after UFC 107 -- is not even close to slowing down. In a strange irony, perhaps all those years of living his laidback Hawaiian lifestyle -- even during times he was supposed to be training -- may help extend his career. While his peers were putting miles of wear and tear on their bodies in the gym, Penn was often coasting on raw talent. But now, while his peers are hanging on to glory days by their fingernails, Penn is in the conversation as the best pound-for-pound fighter in the world.

"Really at this point, at 155 it's hard to see who will have a definitive shot to take him out," said former heavyweight champ Frank Mir, who submitted Cheick Kongo on Saturday and doubles as an MMA analyst for the Versus network. "Maybe if you can wrestle him to death and keep great position, but that's hard to do for five rounds with a guy who might knock you out or submit you. He's a tough number to pull for anybody. He's one of the best fighters in the world."

Time is the most valuable commodity in the world.

It heals wounds. It brings knowledge. It provides perspective.

Lucky for us, BJ Penn has more of it.