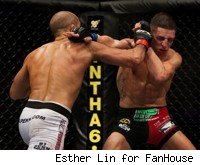 Penn opened with a furious assault in the first minute of the fight, dropping Sanchez and badly hurting him with punch after punch in one of the most dominant first minutes of a title fight you'll ever see. It was amazing that Sanchez even managed to make it out of the first minute, and referee Herb Dean was watching closely and looked like he considered stopping the fight.

.
Sanchez came back later in the round and maintained his composure, but the difference between Penn and Sanchez in the stand-up game was enormous: Penn was landing crisp, effective punches, while Sanchez was swinging wildly and not hurting Penn at all.

The pace slowed down considerably in the second round, but Penn was still in complete control, always faster and more agile than Sanchez, able to avoid Sanchez's striking and takedown attempts and land effective counter-strikes whenever he wanted.

By the third round Penn had peppered Sanchez's face enough that a trickle of blood was flowing down from his mouth onto his chest. The third was a fairly uneventful round, but Penn easily won it again, and Sanchez began to display the body language of a man who didn't think he could win.

Penn methodically controlled the fourth round, and in the fifth Penn finally finished it by opening a nasty cut on Sanchez's forehead with a huge kick to the head, a cut that had blood pouring out of it and that the ringside doctor said was too big to allow the fight to go on. The official result was a fifth-round TKO victory for Penn, the best lightweight in the world by far.

"It just happens," Sanchez said. "B.J. is a great champion, and he came out the best B.J. ever to step into the ring. I did my best and I'll be back."

The question now is what's next for Penn: He's so much better than the rest of the sport's lightweights that the UFC will have a tough time continuing to find credible opponents for him. Penn is the undisputed champion of the world.
http://xml.channel.aol.com/xmlpublisher/fetch.v2.xml?option=expand_relative_urls&dataUrlNodes=uiConfig,feedConfig,localizationConfig,entry&id=797886&pid=797885&uts=1260704392
http://www.aolcdn.com/ke/media_gallery/v1/ke_media_gallery_wrapper.swf
UFC 107 Photos
BJ Penn celebrates his victory over Diego Sanchez at UFC 107 on Saturday, December 12, 2009 in Memphis, Tenn.
Esther Lin for FanHouse
Esther Lin for FanHouse

Roy Nelson and Brendan Schaub stare each other down before their fight at the TUF 10 Finale in Las Vegas, Nev. on Saturday, Dec. 5, 2009.

Roy Nelson takes a shot at Brendan Schaub during their TUF 10 Finale fight in Las Vegas, Nev. on Saturday, Dec. 5, 2009.

Roy Nelson celebrates his knockout win over Brendan Schaub at the TUF 10 Finale in Las Vegas, Nev. on Saturday, Dec. 5, 2009.

Jon Jones attempts to kick Matt Hamill in the face during their TUF 10 Finale fight in Las Vegas, Nev. on Saturday, Dec. 5, 2009.