Revitalized Frank Mir on a Mission After Crushing Cheick Kongo 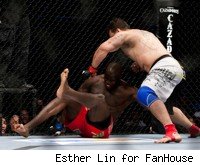 MEMPHIS -- After it was all over, Frank Mir did the right thing. He put away his winner's smile, walked over to his fallen opponent, hugged him and walked away.

By then, there was simply nothing more to be said.

The hardest thing to do in sports is to call your own shot. All that does is add more pressure, more weight on your shoulders, more eyes to your actions. Some people are going to watch to see you fail, others will want to see if you can back up your words.

Mir pulled off exactly what he said he would. He promised to steamroll hard-hitting Frenchman Cheick Kongo at UFC 107, and that was only after offering a blunt critique, saying Kongo had "the worst ground game" in MMA, and that he was "irrelevant" as a fighter.

After his continued diatribes, he had Kongo vowing revenge and the MMA world curious to see if his performance could possibly match his confident words.

Many thought that Kongo would have a sizable edge in striking while Mir's advantage on the ground would be canyon-wide. It turned out only one of the two assumptions were right. The beginning of the end came when Mir connected on a straight left that saw Kongo fall down like a freshly chopped tree. Mir quickly pounced on the opportunity, following him to the mat.

During the pre-fight hype, Mir promised that he only needed to get Kongo down once, and it would be over. Again he proved prescient, as Kongo wouldn't escape the position. Mir latched on to a guillotine choke and squeezed until Kongo -- who refused to tap -- went limp.

"I was expecting a back-and-forth war in that fight," said UFC President Dana White. "Frank looked awesome. It was an unbelievable fight. Listen, when you talk as much s*** as Frank did before that fight, you better go out there and back it up, and he did."

Never has Kongo (14-6) been dominated in such fashion. The last time he was finished was five years ago, and it was in the second round. Add to that the extra motivation Mir supplied him -- Kongo's coach told FanHouse earlier this week that it was his longest camp in years -- and it makes the win even more impressiv

Mir has made no secret of the fact that he will continue to keep one eye on a future rematch with Brock Lesnar. In doing so, he's dedicated himself to adding size to his frame, and he weighed in at 264.5 pounds in facing Kongo.

Mir, who noted he was always naturally muscular without lifting weights, said these days he gains size by simply "looking at" weights. In reality, he is working with former World's Strongest Man competitor Mark Philippi, who was the longtime strength coach at UNLV.

Now the question becomes what is next for Mir. White agreed that the win was so dominant, Mir might have leapfrogged a few contenders at least in terms of fan interest level. Then again, he also admitted it would be tempting to put Mir right back into the rotation, which would help the UFC get through its recent rash of injuries by giving them another bankable fighter at the top of a future card.

For his part, Mir was deferential to Shane Carwin, who was supposed to get the next crack at Lesnar before the champion was indefinitely sidelined with an intestinal problem.

"Obviously, Carwin had the first opportunity there and due to Brock's health, that took him out," he said. "It just depends what Carwin does in the meantime. I know he has to recover from knee surgery. If he goes and has another fight, and I have another fight also, that makes it dangerous for him. If he goes out and has a poor performance and I perform like tonight, that could put me right back up there again."

Mir added that Lesnar's next assessment would be key. The UFC expects to have a better idea about Lesnar's health in about 45 days. But White made it clear all options are on the table.

Until future plans are constructed and revealed, the images of Mir's destruction of Kongo will have to suffice. Mir promised total domination, and he delivered.

As Kongo lay prone on the mat, being looked over by medical personnel, the FedEx Forum crowd rose to their feet in congratulating Mir on the remarkable effort. Mir took a bow and smiled.

Moments later, he took the mic.

"I really do hope that Brock Lesnar is healthy," he said. "He's a father. I wish no ill will on him."

And then, Mir couldn't wait any more. It had only been minutes since he fulfilled his last promise, but he had to do it again. He had to call his next shot.

"That being said," he continued, "get healthy so I can redeem myself and face you. I will hurt you, and that will be the last of it."