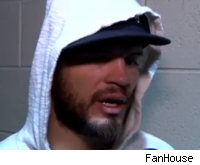 MEMPHIS -- Coming off of two straight losses, Matt Wiman was in desperate need of a victory, and he got one over Shane Nelson via unanimous decision at UFC 107.

FanHouse spoke to the "Handsome" one about his dominant performance, getting his career back on track and dedicating his victory to his brother stationed in Afghanistan.