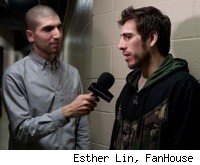 MEMPHIS -- Kenny Florian has already received two lightweight title shots, but he still believes that getting a third sometime in the near future is an attainable goal. And if he continues to defeat his opponents the way he dominated Clay Guida at UFC 107, that opportunity could come sooner rather than later.

FanHouse spoke to "KenFlo" about finishing Guida on Saturday night and what's next for him in the stacked 155-pound division. The video interview is below.