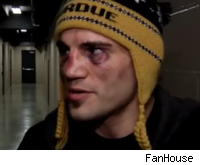 MEMPHIS -- Jon Fitch is considered by most MMA pundits to be one of the top contenders in the UFC's welterweight division, but he told FanHouse following his UFC 107 victory over Mike Pierce that in order to take the next step in his road back to title contention he must start finishing fights. After all, Fitch's last five victories have come via decision.

Fitch also talked about getting cut early in the fight and why he wanted to stand and trade with Pierce during the fight.