Alan Belcher: 'I'm One of the Best Fighters to Ever Fight' 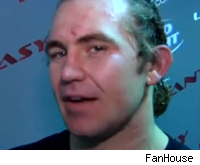 MEMPHIS -- Going into his UFC 107 fight against Wilson Gouveia, Alan Belcher openly talked about feeling disrespected by the fact that he wasn't on the main card. So it's safe to safe "The Talent" proved a point on Saturday night by defeating Gouveia via first-round TKO.

FanHouse spoke to Belcher after the victory about proving a point to the bosses and why he thinks he is one of the best fighters in MMA.