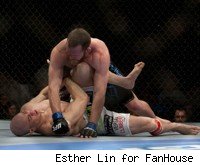 The first bout is scheduled to begin at 7:30PM ET.

Round 1: Grant gets an early takedown, but Burns immediately returns to his feet. Burns floored Grant with a right hand smash, and went in for the finish. Grant survived the frenzy. After they retrned to their feet, Grant score a takedown against the cage. Grant looked for some ground and pound, but couldn't get any sustained momentum. Grant tried to mount, but Burns escaped. Once they got to their feet, Grant hit Burns with a low blow that caused a timeout. A few seconds after the restart, Grant hammered Burns with a right hook. Burns went down hard, and Grant followed in for a few blows before the ref called the fight with just three seconds remaining in the round. 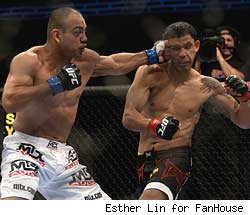 Round 1: Garcia's left eye is reddened very early in the fight after just a few exchanges. Garcia goes for the takedown and gets it with 3:30 left in the round. Johnson tries to work upright but Garcia tries a Peruvian necktie submission. Johnson escapes. A clinch against the fence leads to a furious exchange. As they move towards the center, Johnson does a taunting bodybuilding pose. For that, Garcia punishes him with a big right hand that drops Johnson. Garcia starts pounding away from the top. But suddenly, Johnson hits him with an upkick and sinks in a triangle for the submission. Wonderful fight with a series of momentum shifts. The crowd explodes at the finish. 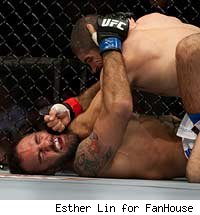 Round 1: Palhares threw a right to set up the takedown and got it. Linhares worked his way up for all of two seconds before Linhares brought the fight to the ground again. After a long period on the ground with little activity, referee Greg Franklin (brother of UFC fighter Rich) stood them up. Palhares got another takedown and tried a leglock. Linhares escaped. Palhares ended up on top again though, and the pair returned to stalemate. The round ended on the ground. FanHouse scores the round 10-9, Palhares.

Round 2: Linhares momentarily trapped Palhares in a triangle, but Palhares escaped. Palhares managed to get to half-guard, then mount. He took Palhares' back briefly, but the latter escaped. The crowd is beginning to get a bit antsy as the two are quite even on the ground. And just as I write that, Palhares gets a heel hook that finishes Linhares. It was the most casual tapout you've ever seen, and the crowd didn't even realize Linhares had tapped. As a result, the arena was dead silent at the finish.

Round 1: Funch brings the highly decorated wrestler Hendricks to the ground so briefly I didn't complete writing this sentence before Hendricks got back to his feet. After a bit of clinchwork, Hendricks scooped Funch up and deposited him on the mat with a slam. Hendricks eventually let him up. Henrricks used a muay thai clinch to great effect with knees and short punches, hurting Funch. Then he dropped to a guillotine, but Funch escaped. Hendricks tried another one with 20 seconds left, but Funch was able to escape again as the round expired. FanHouse scores the round for Hendricks, 10-9. 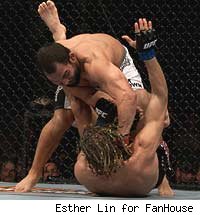 Round 2: Nice exchange early with Hendricks getting the better of it, then he used a double-leg takedown to slam Funch down again. After a few seconds, he let Funch up. Hendricks pinned him against the cage and delivered a series of knees to the head. Funch is a tough dude. He stayed upright. They re-engaged in standup. This time, Funch tried to initiate a takedown. Hendricks stuffed him. With time running down, Hendricks got Funch's back and briefly tried a rear naked choke to no avail. FanHouse scores the round 10-9 for Hendricks.

Round 3: Hendricks is brimming with confidence after the first two rounds. His strikes are sharper and he's the better wrestler. Hendricks eventually drags him down with two minutes left in the round. He moves to side control and then tries an Americana. Funch defends and they return to their feet. Hendricks smothers him against the fence, and the picks him up high for a powerful takedown. Hendricks adds a bit more ground and pound as the clock runs out. Funch may have lost, but he's incredibly resilient. FanHouse scores the round for Hendricks, 10-9.

Round 1: Wiman walking Nelson down early. Nelson caught Wiman with a right hook about 1:30 into the round. Wiman recovered quickly. Wiman landed a hard body punch with 1:30 left as he pressed the action. With 1:15 left, Wiman rocked Nelson with an uppercut. Nelson fell forward, and Wiman managed a few more blows before falling in Nelson's guard. Nelson has gash on his forehead. Nelson came back with a hard shot of his own near the closing bell. FanHouse scores the round for Wiman, 10-9.

Round 2: Wiman landed a head kick at 4:15, but landed in an off-balance position, and Nelson capitalized with a takedown. The referee stood them up after one minute. Wiman scored with a flying knee. Wiman got a takedown with 1:45 left, landing in Nelson's guard. Wiman worked some elbows from the top. Nelson tried a kneebar, but Wiman rolled out, ending up on top as the round ended. FanHouse scores it for Wiman, 10-9.

Round 3: Less than 30 seconds in, Wiman connected on a low blow kick, causing a timeout. Wiman gets an easy takedown at 3:45, back into Nelson's guard. Nelson works his way free and upright. Nelson is visibly tiring while Wiman still looks fresh as the fight winds down. The fight goes back to the ground. Wiman tries to pass to full mount, to no avail. He eventually gets Nelson's back with 35 seconds remaining. Wiman desperately tries to finish it as the final seconds tick away, trying a rear naked choke and then hammering away with punches. Still, it should be enough to win the fight. FanHouse scores the round for Wiman, 10-9. 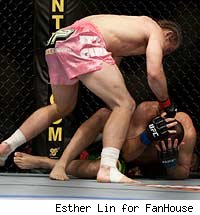 Round 1: These two look like they're ready for a standup battle, and they come out trading leather. Gouveia seems to be getting the better of the exchanges. Until a wild flurry, when Belcher rocks Gouviea with a right. Belcher drills him a body shot/uppercut combo, and Gouveia goes down. Belcher follows him down and lays on the ground and pound for the TKO stoppage.