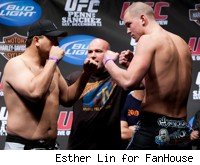 This is the UFC 107 live blog for Paul Buentello vs. Stefan Struve, a heavyweight bout on tonight's pay-per-view.

Buentello returns to the UFC after successful runs in Strikeforce and Affliction. A big man on his own right, the striker will look to stop the 6-foot-11, 21-year-old grappler out of Holland.

Round 1: Buentello found Struve's chin on the first punch, but Struve took it well. They clinched and Struve tried to pull guard, but Buentello held him against the fence, and Struve disengaged. Struve took him down and got his back quickly. Struve locked in a body triangle, and flattened Buentello out. Struve tried a rear naked choke, but couldn't sink his arm under Buentello's chin. He tried again. Eventually, Buentello turned into Struve, and into his guard. By then, there was limited time to work, Just under 20 seconds, and Buentello could manage little before the round ended. FanHouse scores the round for Struve 10-9.

Round 2: Overhand right for Buentello early. Struve moved in, and Buentello drilled him again. Struve went down, but Buentello didn't follow him there, instead letting Struve up. Struve bullrushed him towards the fene and they clinched. Struve dropped down to try for a kneebar, but Buentello defended. They returned to standing. Struve leaped into a jumping knee, and Buentello timed it perfectly, catching him with a right. Struve went down. Buentello, not wanting to go into Struve's guard, let him up. Struve wisely took his time, giving him a few extra seconds. It turned into rock 'em, sock 'em robots with 60 seconds left. The crowd exploded at the exchanges, and during a quick break, Struve and Buentello actually touched gloves in respect. Awesome round. FanHouse scores it for Buentello, 10-9.

Round 3: Struve trying to stay outside early in the round with kicks and jabs. Struve just chopping away with kicks to the thigh. Buentello looks like he's trying to set up the home run right hand. Buentello drills Struve with a right. Struve falls against the cage, but Buentello doesn't follow him. With 15 seconds left, Buentello's right finds a home again. The two exchange again as the round and the fight ends. Great opener for the pay-per-view. FanHouse scores the round for Struve 10-9.