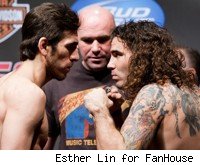 This is the UFC 107 live blog for Kenny Florian vs. Clay Guida, a lightweight bout on tonight's pay-per-view card.

Florian and Guida are each coming off a loss to a fighter on tonight's championship bout -- meaning a win here will keep the victor within reach for a title shot. Florian lost to Penn via submission at UFC 101, while Guida dropped a split decision to Sanchez in June.


Round one: Guida is his usual frenetic self, bouncing around the cage while Florian is a lot more controlled in his actions. Guida lands the first significant punch of the night, a short right that clipped Florian. Guida knocks him backwards and Florian falls down, but Guida doesn't hold him there for long. He did manage to cut Florian on the right brow. Crowd is bigtime pro-Guida and chants his name. Florian scores a hard right. Florian gets a takedown at 2:00, but Guida pops right back up. Guida tried a throw takedown, but Florian ended up on top. He couldn't hold Guida down though. Guida got cut and is bleeding badly. Florian scoops him up and slams him down, turning the tables. Ref Mario Yamasaki has to stop the fight to get the doctor to look at his cut. The doctor says he's OK to continue. The round ends seconds after the re-start. Super close round, but FanHouse scores the round for Guida 10-9.

Round two: Florian beginning to find the range with his right jab. The blood trickling in Guida's right eye may be helping Florian with that. Florian rocks him with a lead left, right hook combo and drops Guida. He pounds away from the side and quickly takes his back for the rear naked choke tapout.