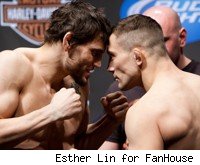 This is the UFC 107 live blog for Jon Fitch vs. Mike Pierce, a welterweight bout on tonight's pay-per-view.

Fitch, a former title challenger, will test his speed, wrestling and ability to adjust game plan after losing Ricardo Almeida and Thiago Alves as opponents due to injuries. Fitch settled on Pierce, a wrestler who won his UFC debut in September, knocking off Brock Larson via unanimous decision.

Round one: Fitch caught an early kick and eventually dragged Pierce down, taking his back in the process. Fitch had his hooks in, but couldn't do much with the position other than pepper Pierce with strikes. Pierce got free and took Fitch down with two minutes left. Fitch got back to his feet and they clinched against the fence until the ref restarted them. Fitch is cut under the left eye though it is hard to know exactly when it happened. The round ends with an even exchange. FanHouse scores the round for Fitch, 10-9.

Round two: Fitchwas getting the better of the standup early, though he landed nothing bone-crushing. Pierce tried a kick, and Fitch briefly took him down again. There were more exchanges in this round, but neither side could land anything of note. A lot of clinchwork to end the round. This is going to be a tough fight to score. Pierce is cut over the left eye, and the two use a nice flurry to finish the round. FanHouse scores the round for Fitch, 10-9.

Round three: Pierce comes out strong with his striking. He pushes Fitch against the fence. Pierce asserting himself here, landing a good left hook midway through the round. Fitch tries a headkick, but Pierce ducks away. Fitch shoots in for a takedown with 1:30 left. Pierce breaks free with 50 seconds remaining. Fitch lands a hard knee. Pierce fires right back and they have their best exchange of the fight. Both men firing away, but Pierce does more damage in the final minute. FanHouse scores the round for Pierce, 10-9.