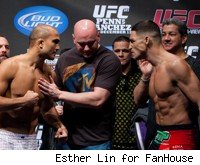 This is the UFC 107 live blog for BJ Penn vs. Diego Sanchez, the lightweight championship bout and main event of tonight's pay-per-view.

Penn, who will makes his third UFC lightweight title defense, has lost only one fight at 155 pounds -- and it was a majority decision loss nearly eight years ago to Jens Pulver. Sanchez finds himself in a title bout after only two lightweight fights, knocking off contenders Joe Stevenson and Clay Guida.

Round 1: Penn takes the center of the cage, as surprisnly, Penn comes out controlled. Penn drops him with a hard right hook. Penn mauls him with a series of rights. Somehow, Sanchez doesn't lose consciousness. Ref Herb Dean looks in closely, as Penn hammers away and the crowd explodes. Sanchez manages to defend himself just enough to stay in the fight. He eventually works himself upright. Wild start. Sanchez throws a headkick, showing he's not going everywhere. He clinches Penn against the fence with 2:30 left. Sanchez seems to pay every time he gets into Penn's striking range. Penn tags him with a pair of rights in the final seconds. FanHouse scores the round 10-8 for Penn.

Round 2: Sanchez tries a single leg takedown early in the round, but no dice. Sanchez is a bit gunshy now, and you can't blame him after that opening round. His action is coming in short, controlled bursts, and he's usually better when he's in machine-gun fire mode. Sanchez is bleeding from his right ear now. Penn is stalking him around the cage. Sanchez tried another takedown, but again to no avail. FanHouse scores the round 10-9 for Penn.

Round 3: Penn landed a pair of rights before Sanchez moved in for a single leg against the fence. Penn had no problem keeping his balance on one leg, even hitting Sanchez with uppercuts while defending the takedown attempt. Sanchez is bleeding from the mouth now as Penn takes near-total command. Penn looks like he's getting his finisher's instinct now as he begins to wade forward more and more. Diego spent about 35 seconds trying for a takedown, didn't even come close, and as they separated, Penn hit him with three clean, hard shots. FanHouse scores the round for Penn, 10-9. On to the championship rounds...

Round 4: Sanchez's face is pretty busted up now, and he's got two more rounds to go. Penn thudded a right hand and a left hook. Sanchez ate both. There's no questioning his toughness now. Sanchez landed his best strike of the night coming out of a clinch with an elbow. Penn catches him with a left hook with 1:15 left, and Sanchez clinches, giving himself recovery time. Penn caught him with an uppercut and a knee in the last 15 seconds. This is turning into a clinic. FanHouse scores the round for Penn, 10-9.

Round 5: Sanchez tries another takedown and the crowd boos him. He gets Penn to his knees for a moment. Penn gets back to his feet. Crowd starts a "BJ" chant. Penn lands a kick, then a series of uppercuts. Sanchez out of desperation drops for a single leg. Penn breaks free. Herb Dean calls a timeout to check a cut over Sanchez's left eye. It's a huge, deep cut, and the doctor stops the action.

This puts an exclamation point on an excellent show filled with tremendous fights and finishes.