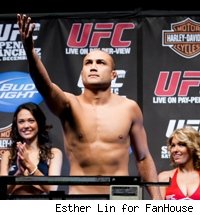 MEMPHIS -- The UFC certainly did not plan the BJ Penn-Diego Sanchez lightweight championship match for any nostalgic reasons, but sometimes in sports, fate has a way of delivering the perfect scenario at the perfect time.

Dana White and the UFC hope that this is one of those times.

For the organization, the decade began with a March 2000 show, and the first matchup broadcast on that UFC 24 event was the first meeting between 155-pounders in company history. Now, the UFC will bookend the decade with a UFC 107 main event showcasing arguably the greatest lightweight in MMA's short history against a fiery challenger.

All parties involved hope the end-result is a classic, and both athletes have promised a clash.

This Memphis event was not necessarily supposed to be this way. The town was originally selected by the UFC to host the expected Rashad Evans-Rampage Jackson fight for a simple reason: Memphis is Jackson's hometown. But the bout fell apart after Jackson withdrew to film "The A-Team" movie.

When that happened, Sanchez and Penn fell into the main-event slot, and the lightweights were tasked with the role of closing out the year and the decade for the UFC.

"This is my dream," Sanchez said. "I've waited my whole life to get my opportunity at that beautiful belt, and who better [to do it against] than BJ Penn, one of the greatest guys in the sport, a straight-up legend."

A fight between the two was first talked about in 2007, when Sanchez was a welterweight and Penn was still waffling between weight classes, but Penn ultimately decided to stay at 155. For the 27-year-old Sanchez (21-2 overall), it's been a circuitous journey. He started his UFC career as a middleweight on The Ultimate Fighter, then dropped down to welterweight, where he compiled a respectable 7-2 record. But after finding himself often outsized by his opponents, he realized his ultimate fate lied in the UFC's lightest division.

After wins over Clay Guida and Stevenson, he finds himself on the precipice of a dream.

Sanchez, often cast as one of MMA's most mercurial personalities for his new-age beliefs and unique training regimens, is powered by his own positive thinking. A follower of Tony Robbins and a devout Christian, he has voiced his belief that his faith in himself will power him through Penn.

"I learned that thoughts become things, and what you think, you achieve, so I'm always thinking with a positive mentality," Sanchez told FanHouse. "I've always believed I'm the best in the world. This training camp, everything's come together perfectly and now I'm really 100 percent in my heart, mind and soul that I'm the best 155-pounder, and now I get my chance to show the world."

Beating Penn (14-5) will be no easy task. The Hawaiian has long been one of MMA's most talented and well-rounded fighters. After self-admittedly cruising through training for a long stretch of his career, he's rededicated himself to his legacy since 2007, smashing through all his lightweight challengers and losing only in a superfight to welterweight powerhouse Georges St. Pierre.

Where before the questions surrounding Penn were regarding his stamina and conditioning, now they are about his legacy and place in history. The division he reigns over once had questions about its long-term future as well. After his title match draw with Caol Uno in Feb. 2003, the organization put the belt on ice, where it remained until 2006. While Sean Sherk is the man who dusted off its cobwebs upon the belt's reinstatement, it is fitting that at the end of the decade, it is Penn -- the most illustrious and celebrated lightweight -- in the spotlight.

It is further proof of just how far Penn, and UFC's lightweight division, has come.

Jens Pulver, who competed in the first-ever 155-pound match with David Velasquez back in 2000, remembered the match in a recent interview with FanHouse. Recalling the crowd as uneducated in the complexities of the sport and unsure about the legitimacy of the lighter weight fighters, Pulver marvels at the division's rise, even if he knew it was going to happen all the way along.

"For me, I knew right then, it was showcase time," he said. "It was the first time we had 155-pounders. It was go-go time. I knew what I was doing: I was carrying 155 pounds, and I was going to put it right in the limelight."

Penn and Sanchez hope to keep it there.