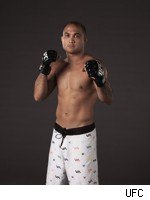 UFC lightweight champion BJ Penn was on the mark and ready for challenger Diego Sanchez at the UFC 107 weigh-ins Friday afternoon from the FedExForum in Memphis, Tenn.

"I just want to enjoy all this and go out there and do my best and keep doing my best," said Penn, who weighed-in at 155 pounds.

The spiritually inclined Sanchez, who checked-in at first at 156 pounds, but made it down to 154.5 on his second try after the weigh-ins presentation, believes the belt will be around his waist come Saturday.
"Destiny, baby; two words," Sanchez said. "One word: Destiny!"

Cheick Kongo, who stepped off the scale at 239 pounds, will have the three-inch reach advantage, but he'll be outweighed by a bulked up Frank Mir. Mir checked in at 264.5 pounds, nearly 20 pounds heavier than when he fought 265-pound Brock Lesnar in July.

Lightweight contenders Kenny Florian and Clay Guida both registered at 156 pounds, but while their weight were identical, their demeanors clashed. Guida was his animated and energetic self, approaching the scale as if he was warming up for a fight. Florian was reserved, perhaps drained from the weight cut.

Edgar Garcia weighed-in two points over the one-pound allowance at welterweight, but cut down to 171 pounds after the weigh-ins. His opponent DeMarques Johnson missed weight by half-a-pound at the first go around, but made weight on his second try on stage once he removed all clothing.

Alan Belcher and WIlson Gouveia agreed beforehand to fight at 195 pounds instead of middleweight. Belcher weighed 195, while Gouveia stepped off at 193.