Random Thoughts on UFC 107 From Memphis 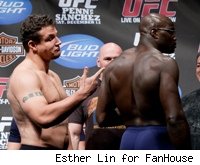 MEMPHIS -- I have a feeling that UFC 107 is going to end up being a lot more exciting than most are expecting.

The card is filled with a bunch of fighters who are known for going to battle, from undercard fighters like Kevin Burns, Matt Wiman and Alan Belcher to main card entrants like Jon Fitch, Clay Guida and Cheick Kongo to both main eventers, Diego Sanchez and BJ Penn. That is a lot of heart on this event, and I think it'll come shining through on Saturday night.

There were a couple of interesting developments today, the first of which was the issue with the Tennessee athletic commission scales.

Several fighters believed the scale was off, and could be seen visibly complaining after being forced to strip down in order to make weight. One fighter, Edgar Garcia, who checked in at 173 for a welterweight fight, was forced to return to the back and sweat off more weight, which he did.

Some other interesting nuggets:

• Both The New York Times and The Boston Globe have reporters at UFC 107. One longtime UFC public relations official said he believed it was the first time both had attended the same event. A French television station is also credentialed, and following Kongo.

• Frank Mir weighed-in at 264.5 pounds for his matchup with Kongo, which is the heaviest weight of his career. That caused a few raised eyebrows in Memphis, but Mir has his reasons. The former UFC champ has incorporated more heavy weight lifting in his training in hopes of being more competitive with the behemoths of the heavyweight division -- most specifically, ailing heavyweight champion Brock Lesnar.

Mir remains very focused on a potential rubber match with Lesnar but knows he must get past Kongo first. The two also had one of the most awkard moments of weigh-ins, when Kongo turned his back to Mir during what is usually the pre-fight staredown, and Mir smugly waived him off.

• Diego Sanchez's fan army is growing. During his walkout to the weigh-ins, a large contingent of fans started chanting "Yes!" in his honor. Sanchez often voices the positive motivation to himself while walking out to the cage before his fights. The chant has also been heard walking around Memphis streets.

Sanchez and Penn have been generally respectful towards each other during even week, but exchanged words just after their pre-fight staredown.

• No. 1 welterweight contender Dan Hardy did a question-and-answer session with fans prior to the weigh-ins. Among the highlights, Hardy said he was picking Sanchez to upset BJ Penn tomorrow, and that there was no way he could ever make 155 pounds and move down to lightweight.

"I think his weakness is me," Hardy said. "I have his kryptonite, and I plan to exploit it with my left hook at about 1:34 of the second round.