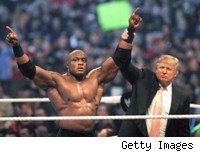 Pro wrestler Bobby Lashley has signed a contract to continue his MMA career with Strikeforce, and he'll step into the cage for the first time on the promotion's January 30 show in Miami.

Lashley is a big heavyweight with a solid amateur wrestling background, but we don't know much about what kind of MMA fighter he is yet. He's built up a 4-0 record fighting fairly easy opponents, and the question is whether Strikeforce will force him to challenge himself against tougher competition. Lashley isn't ready yet for opponents at the top of the heavyweight division, but he shouldn't get hand-picked opponents just to pad his record, either.

I'd love to see Lashley fight someone like the undefeated prospect Shane del Rosario, but I'm guessing Strikeforce will give Lashley an easier opponent than him.

The January 30 Strikeforce show also features the MMA debut of former football star Herschel Walker, so it will be high on star power but perhaps not so high on MMA skill. Lashley is a great name for Strikeforce to add to its stable, but he's got a long way to go before he's a great fighter.