Bobby Lashley: I'm in Strikeforce to Fight the Best 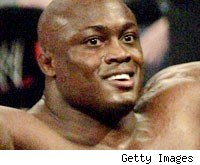 Bobby Lashley is still primarily known as a professional wrestler. But in an interview Friday morning after the announcement that he has signed with Strikeforce, he said that he's completely committed to mixed martial arts.

Michael David Smith: What made you decide to sign with Strikeforce?
Bobby Lashley: The main thing is I've been put on the shelf for a long time, since June, and I want to stay really active. I had some problems with contracts for a while and that was getting pretty frustrating, but at the end of the day [Strikeforce CEO] Scott Coker got with my manager and got with the company that owned my contract, and Scott along with Bob Cook worked things out and set me up with a good contract. I like Strikeforce. They're a good organization, Fedor is there and so are some other good heavyweights, so I can go out there and test myself. I felt like now was the time to go for it.

Do you know who you'll be fighting?
No, I don't know yet. I just signed the contract last night. I think we'll have an opponent next week.

If it were up to you who would it be?
Maybe we'll do a Bob Sapp number two (laughs). No, to tell you the truth I don't know. I know everybody wants me to fight a Top 10 guy but I need to get in there against somebody I'm a good match-up with. I want to be tested, but I don't see myself fighting Fedor or [Strikeforce heavyweight champion Alistair] Overeem first.

I think it's fair to say you're not ready for Strikeforce's top heavyweights -- Fedor, Overeem, Brett Rogers or Fabricio Werdum -- but are you ready for the next level? Maybe someone who's a prospect like Shane del Rosario? Or will Strikeforce want to match you with an easier opponent than that or a bigger name than that?
I really don't know. I'll fight a handful of times for Strikeforce and I don't know for sure what they'll want to do with me in my first fight.

One name that has been mentioned is Ron Waterman -- is there talk that you might fight him?
I think people were talking about that fight for October or November but I don't know if that fight is still a go.

How many fights do you have with Strikeforce?
I actually don't know exactly how many fights I'll do with them. I'm working with Dan Lambert, who's the owner of American Top Team, and he's pretty much guiding my career at this point, and I'll trust him to help me figure all that out.

What do you view as your strengths in MMA and what do you still need to improve?
I want to improve on everything. And that includes my wrestling, even though I come from a wrestling background. In this sport people are getting better and better every day, mastering every level of the game, and that's what I need to do. I've been working with a muay Thai coach, working on my kicks and strikes, and working on my boxing, and that's important for me to improve. My strength will always be my wrestling but I need to use that wrestling effectively, work on my ground and pound. I think my boxing, my kickboxing and my muay Thai have come a long way, but my strength will always be my wrestling.

Are you 100% dedicated to MMA, or is pro wrestling still a big part of who you are and what you do?
I'm 100% committed to MMA. I don't think people realize that the pro wrestling I do with TNA is very limited. That's just a small amount of time and the owner of TNA wants to help my MMA career. He knows I'm dedicated to MMA and he supports that.

Do you think it's realistic to think that a year from now we could be talking about you fighting Rogers, Werdum, Overeem or even Fedor?
Yes. I definitely hope so.

Obviously you've got a ways to go before you'd fight Fedor, but is that your ultimate goal? To test yourself against the best in the world?
Yes. If I'm in Strikeforce I'm going to want to fight the best they have.

But you also need to pace yourself and build to that level, right?
Of course. And there are a lot of good fighters in Strikeforce that I can fight so I can build myself to the point where I'm ready for that fight. And if Fedor has the title of the heavyweight champion, that's really why I'm in this -- to try to become the best.

And is that why you decided to push pro wrestling aside and make MMA your focus?
I have a lot of pent-up aggression, and this is like the modern-day fight club. I have a lot of friends who are in MMA, and when I was in professional wrestling I'd watch them fight and through those years of wrestling, and I'd always want to be able to go out there and fight and see what I have, see what I can do. I love the training, I love learning jiu jitsu, I love the striking, and I want to see what I can do.

A lot of fans still view you as a pro wrestler first and an MMA fighter second. What do you want them to know?
Just that they should watch me and see for themselves. I have a Facebook page where I interact with fans, answer questions, show people my training and everything. I want everyone to know that I'm not one of these people who is just trying to use MMA to promote myself. I'm in it because I respect it, I respect everybody who's in the sport and I want to be the best.