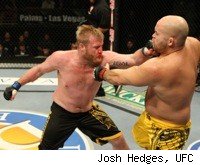 MEMPHIS -- Justin Wren, who was a cast member of the most recent season of The Ultimate Fighter and who lost his UFC debut in a split-decision at the TUF 10 Finale last Saturday, was cut by the UFC, a source confirmed to FanHouse on Thursday.

Wren, who is just 22 years old, did well during TUF, submitting Wes Sims in his first-round matchup before dropping a tight majority decision to eventual TUF champ Roy Nelson in the quarterfinals.

Wren (8-2 overall), lost on Saturday to Jon Madsen in a close contest.

In another piece of UFC news, Tim Credeur has been forced to withdraw from his Jan. 11 scheduled bout with Mike Massenzio due to an undisclosed injury, according to a source close to the fight. FanHouse's Ariel Helwani has learned that Gerald Harris, a former cast member on the seventh season of The Ultimate Fighter, has a signed a new deal with the UFC and has agreed to face Massenzio.

Credeur (12-3) most recently had a six-fight win streak snapped by Nate Quarry at UFC Fight Night 19 in September. Massenzio (11-3), who is coming off knee and neck surgeries, hasn't fought since Dec. 2008, when he lost via TKO to CB Dollaway.

Dong Hyun Kim has been forced to pull out of his UFC 110 bout against Chris Lytle due to a knee injury. No replacement has been signed just yet.