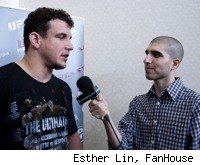 MEMPHIS -- Frank Mir is considered to be one of most honest interviews in MMA, and when FanHouse caught up with the former heavyweight champion at Wednesday's UFC 107 media, he was his usual candid self.

Mir elaborated on why he criticized Cheick Kongo's ground game, why he wants to fight Brock Lesnar so badly, and how his new training regimen has drastically changed his career.