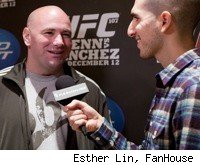 White also talked about last weekend's TUF finale, the recent string of injuries the organization has had to deal with and confirmed Matt Hughes vs. Renzo Gracie for 2010. Check out the video interview, which contains mature language, below.