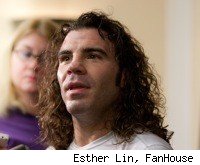 MEMPHIS -- No one will ever accuse Clay Guida of being a boring fighter, as "The Carpenter's" frenetic fighting style usually produces memorable moments inside the Octagon. But as the Chicago-native embarks on his seventh year as a pro fighter, he understands that the most important thing right now is to win fights decisively, not just produce exciting fights.

FanHouse spoke to Guida at Wednesday's media workouts about evolving as a fighter under the tutelage of Greg Jackson and how plans to defeat his opponent at UFC 107, Kenny Florian.