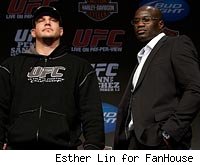 MEMPHIS -- It was the height of irony that just at the conclusion of the UFC 107 press conference, one in which Frank Mir spent much of the time explaining his recent, critical remarks of Cheick Kongo, he received the Tequila Cazadores Authentic Spirit Award, which recognizes fighters who exemplify, among other things, good sportsmanship.

It's safe to assume Kongo does not have a vote on the selection committee. What is obvious, however, is that Mir's unfiltered thoughts on Kongo have devolved into contempt on the latter's part. It is a feeling that may be real, but has not always existed.

Last year, as Kongo's Wolfslair teammate Quinton "Rampage" Jackson was preparing to fight Wanderlei Silva, the camp -- Kongo included -- eventually moved to Las Vegas for the last three weeks of training. The gym they chose in Las Vegas -- Striking Unlimited -- was known primarily for its most famous charge: Mir.

Anthony McGann, who is Wolfslair's co-manager and a key member of the Kongo camp, says Mir was a gracious host during their visit. But even then, Kongo instinctually realized that keeping his distance was a good idea; the two never sparred together.

"Frank Mir is a friend of ours," he said. "Our whole team gets on great with him. Even then, though, Kongo said, 'I don't want to train in front of him. I'm going to fight that guy one day.'"

That day comes Saturday. Kongo, who is usually soft-spoken and short on words in the lead-up to his matches, isn't exactly spewing out venom, but it's clear he's not happy about Mir's opinion.

"He's a former UFC champion heavyweight. He did a good job. I respect that," Kongo said. "But as a person? No. I don't let anyone judge me like a piece of s***. And he did."

Kongo took exception to comments Mir made in hyping up the matchup. In a video produced by the UFC, Mir offered criticism much harsher than your typical pre-fight interview, saying, among other things:

• "Obviously his wrestling is not the best wrestling."
• "The fight with Cain Velasquez, he was getting mauled for 15 minutes. He didn't look like he threw in the towel, but he had very poor technique. He had no answer."
• "...his ground game is amongst some of the worst ground game we have in the heavyweight division."
• "I hope to only take him down one time, and that will be the end of the fight."

It's only gotten worse since then. Because they had no past hatred or run-ins, it stands to reason that Mir's pointed words towards Kongo are calculated. He likely hopes that the approach has a two-prong effect: first, it will take Kongo off his game; and second, it helps promote a fight that was otherwise lacking a bit of sizzle.

Mir has been known to use psychological tactics in the past. Prior to his UFC 92 fight with Antonio Rodrigo Nogueira, reports out of Mir's camp indicated he was hurt during training and having trouble preparing. But a source close to the camp told FanHouse that Mir deliberately planted reports in the media to put doubt in Nogueria's mind about his condition.

In regards to Kongo, Mir all but admitted that his sharp tongue was a psychological ploy.

"I don't do anything by chance," he said. "I try to be as calculating as possible."

All things being equal, Mir (12-4) would rather be fighting UFC champion Brock Lesnar, who he clearly dislikes, and with whom he admits he has "sort of an obsession." But he also realizes he can't get back to a match of that magnitude without clearing away some of the brush in his path, including Kongo (14-5-1). Both of the men are coming off losses, with Mir coming off his UFC 100 TKO at the hands of Lesnar, and Kongo returning from a UFC 99 decision at the hands of Cain Velasquez.

As mentioned, Mir's criticism of Kongo stems from what he perceives to be a lack of wrestling and ground skills. He has made multiple mentions of the fact that Velasquez was able to take down Kongo at will during their feet, even seconds after being badly hurt with strikes that buckled him. McGann, however, says that analyzing Kongo off that fight does not make for a complete picture. He notes that Kongo accepted the fight on only three week's notice, then hurt his knee in camp and was advised to pull out of the fight but refused.

"That isn't the Cheick you'll see on Saturday," he said. "He'll be prepared. He's going to start quick. He had the toughest, strongest training camp he's ever had in his life. On Saturday you're going to see a very tough Cheick Kongo."

The Thursday Kongo was his usual self. During a photo opportunity, the two didn't shake hands, but neither did they talk any trash while they stood face to face. But the look on Kongo's face certainly said what he was thinking.

"Kongo is the nicest guy you'll ever meet," McGann said. "But he's also probably the meanest man you'll find as well when it comes to this. He thinks Frank has disrespected him. And while he hasn't said much about it, he believes you'll see his response on Saturday."