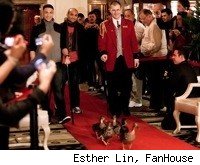 MEMPHIS -- UFC 107 headliners, BJ Penn and Diego Sanchez, were the Honorary Duckmasters at the traditional "March of the Ducks", which happens daily at the famous Peabody Hotel in Memphis. The tradition, which dates back to the 1930s, sees the "Peabody Ducks" march out of the elevators and into a fountain in the middle of the hotel.

FanHouse was on hand to witness the event, and below is a video of it.