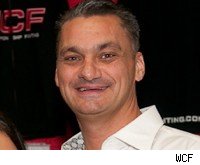 Last week, Massachusetts became the 42nd state to legalize mixed martial arts after Governor Deval Patrick signed the bill into law for the state to regulate the sport.

In this FanHouse exclusive, we spoke to Joe Cavallaro, the promoter of the state's leading promotion, World Championship Fighting, to find out the impact regulation will have on the Bay State and his promotion.

Ray Hui: I know you've been waiting a long time for this to happen. What went through your mind when you heard the governor finally signed the bill?

Cavallaro: I can't believe that they did it. I can't believe – (Laughs.) First off, I can't believe it took as long as it did. I don't know a lot about politics but I guess the machine works slowly. It's been a couple years we've been working on this. The boxing commission in Mass. Has been out for I think, four years. When they originally stepped out, we thought it was for a very, very short time. But four years later, and two years of the UFC really pushing and everyone lobbying to get it done, it's finally around its course and the governor has finally signed it. It says a lot for how far mixed martial arts has come, and how popular it's gotten over the last couple of years.
What does it mean for MMA in Massachusetts to have a regulatory body?

Cavallaro: It puts us on an even playing field. When I say that I mean – if you picture the Patriots going to Pittsburgh to play football and the rules in Pittsburgh are different than they are in Boston, and you go to Miami, and they're a little bit different down there ... This gives us a unified playing field, and everybody knows what the rules are going to be, everybody knows what to expect when they go to a fight. I think it's all positive.
What kind of effect will it have on your own promotion, the WCF?

Cavallaro: It really doesn't change much. We'll do whatever the boxing commission decides. We do two, four-minute rounds (plus two-minute overtimes), because that's what the boxing commission in Massachusetts has always done. And that's what we agreed to do when they stepped out. And again, we always thought it was going to be a very short time; so that's kind of been the way we've run it. One of the things we've done is that we've done it in a ring, because they've done it in a ring. I didn't want to change anything. I didn't want to go out of the way and change the way they've been doing things. I don't see any big changes except if the boxing commission decides, "Yeah, we want to use a cage," then we'll use a cage. If they want to go to three, five-minute rounds, which I'm hoping they'll do, then that's what we'll do. I'll do what they say and we've always done it very professionally.
How were you allowed to promote MMA shows in past?
Cavallaro: The boxing commission did not regulate mixed martial arts. They didn't regulate hockey, they didn't regulate wrestling, they didn't regulate Karate, they didn't regulate a lot of things. So there was no law against doing it. It's just the boxing commission was not involved. I went to the chief of police and had a discussion with him and explained to him what mixed martial arts was, and what we were proposing to do, and made sure he was real clear on it. And I went to the venue (The Shriner's Auditorium) and talked to them about it, the building inspectors to view the floor plans and made sure they were okay with the way everything was laid out and everything. We did everything we were supposed to do. There was no law against it, and as long as everyone understood what we were doing and understood it was a sport -- we had a doctor ringside at all times, we had paramedics and backup ambulance. We had insurance. Everything you'd expect at a regulated show, we did. Does that put less work on you since it's not up to you to hire officials?

Cavallaro: The only thing I see different will be financially. The commission actually takes a percentage of the gate, which is a small price to pay to make sure it's regulated and everyone is doing it the same way (4% of ticket sales; 2% of televised events).

Do you save any money since the commission hires officials?

Cavallaro: Not that I know of? We'll see. It would be nice if we did, but I have a feeling it won't be. We'll see. I'm really happy to be working with them, to be honest with you. I've been working with them since day one and I got to all the meetings I get invited to, and I give my input and try to help people that don't understand it. Their main concern is safety too, so that's it.What's the process like for finding the right referees and judges?

Cavallaro: I'm hoping that they use the same guys that they have. I think ideally what I want to see as a promoter is to have a list of people that are certified to be refs, judges, timekeepers. I'd love the ability to be able to go in and say, "these are the guys that we would like to use," and "these are the guys we do not want to use." I don't know if that's going to be the case. I know that's the way it is in New Hampshire. The way New Hampshire handles it, and New Hampshire is handled by their boxing commission. Basically what they do is they give the promoter a list of who they can work with that are certified by us -- and the good thing is about that is that you can pick who you want to use. The best part about that is that I can set it ahead of time. i don't have to worry about who is going to be judging that night.

Turning to your promotion. What are your plans for the next show at the Shriner's Audtitorium?

Cavallaro: Yeah, we're going to do it at the Shriner's. We are just starting to do matchups right now. Some of the guys who are going to be competing are obviously, John Benoit, who's been with us for quite awhile now. He's doing great. He's on a tear. Guy's like Tom Moreau, Dan Bonnell, we're talking to Mike Campbell again about bringing Mike back. We're working on that right now. One of the things I wanted to see was where the boxing commission was going to land on this and whether the governor was going to sign it; so we'll hopefully be the first event that they work with.