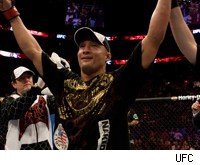 Despite winning the Fight of the Night award at UFC 105, middleweight Denis Kang's 10-month run with the UFC has come to an end for his loss to Michael Bisping last month at the event in Manchester, England.

FanHouse confirmed the release Wednesday with the American Top Team and while Kang's management would not specifically name the promotions Kang is eyeing, they told FanHouse that the French-Korean Canadian is currently in talks with several promotions in the US and abroad.

Fighting for a laundry list of promotions since 1998, Kang made his long-awaited UFC debut in January at UFC 93 against Alan Belcher, but the hype was quickly derailed when he tapped out to a second-round guillotine choke. Though he was demoted in his next fight to the undercard at UFC 97 in April, he scored the high-profile Bisping fight with a win against Xavier Foupa-Pokam.