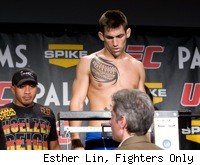 Strikeforce and Zuffa LLC won't see eye-to-eye on many things, but when it comes to banning the controversial California-based Hoelzer Reich apparel company, both organizations have agreed that there is no place in their respective promotions for them.

So a day after Zuffa, the parent company of the UFC and WEC, told Maggie Hendricks of Yahoo!'s CageWriter.com that they have banned their fighters from wearing Hoelzer Reich apparel during the fights, Strikeforce director of communications Mike Afromowitz informed FanHouse on Wednesday that the San Jose-based organization laid down the same law.

"We will not permit our fighters to wear this type of apparel in our cage," Afromowitz said. "Strikeforce will not tolerate any offensive behavior at any location or at any time by its fighters."

Hoelzer Reich has been a hot topic in the MMA world for several weeks now, but the situation reached a boiling point when UFC lightweight fighter Joe Brammer was seen wearing their apparel during Saturday night's The Ultimate Fighter Finale broadcast on Spike TV. Strikeforce airs its events on Showtime and CBS.

While the clothing company has repeatedly denied having any affiliation with Nazism, the fact remains that the symbolism used in their shirts resembles many of the imagery commonly associated with Nazi Germany.

Jamie Vine, a co-owner of Hoelzer Reich, issued a statement on the company's Web site, denying affiliation with any kind of hate group and looking to clear the air, but it appears as though when it comes to the MMA world, the damage has already been done.

"The iron cross we use seems to be the focus of much criticism, however, it is a symbol of courage, honor, and leadership. The imagery and symbols we have chosen to use in our clothing line were chosen and referenced from several German and Prussian Military themes, based on our interest of WW1 and WW2 Germany. The Iron Cross, the Prussian Helmet, the German Military collar, and the Peaked Cap are some of the images we referenced. We [of course] removed any swastika's and 'SS' bolts, for the meaning of the German / Prussian soldier to us represents strength & honor, the theme of our line.

" ... Over the last few weeks, we have realized that the general public's sensitivity to our clothing line that has some references of historical German imagery has offended some people, and caused them to make quite the fuss about it on the forums, leading to quite the discussion in the MMA community. The imagery that we reference dates back hundreds of years before Nazi Germany, and we did not realize that the brief association some of the imagery had with Nazi Germany over 70 years ago would still be so sensitive to so many people. Bottom line: we NEVER meant to offend ANYONE. We do not support the Neo Nazi "cause," nor do we promote any racist ideologies."


The company used to sponsor WEC fighter Donald Cerrone and Strikeforce's Lyle Beerbohm, among others, but have since removed all images of them wearing their shirts on their Web site. As of Wednesday morning, the only fighter's image on their Web site is that of Marcus Sursa.

The MMA community, particularly those online, should be very proud of themselves today. They, not the organizations, were the first to recognize that they were uncomfortable with the images being associated with the clothing company and they screamed loud enough until the executives in charge took action.