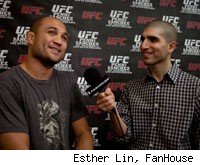 MEMPHIS -- Diego Sanchez has repeatedly said that his endurance and cardio will be one of the reasons why he will defeat BJ Penn and capture the lightweight title at UFC 107 on Saturday. But when FanHouse asked "The Prodigy" about that at Wednesday's media workout, Penn, who claims to be in the best shape of his life, said that Sanchez couldn't be more wrong.

Penn admitted that Sanchez will be his toughest test as a champion since defeating Joe Stevenson to capture the interim title at UFC 80, but he remained confident that "The Nightmare" will end up being another notch on his belt when all is said and done. Check out the video interview below.