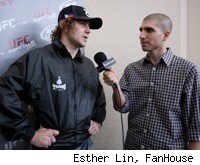 MEMPHIS -- It's safe to say that Alan Belcher is entering his UFC 107 fight against Wilson Gouveia with mixed emotions. On the one hand, the native of nearby Jonesboro, Ark., is excited to fight in front of a lot of friends and family, but he is utterly disappointed that he won't be competing on the main card.

When FanHouse spoke to "The Talent" at Wednesday's media workout, he expressed that frustration while also discussing his game plan against Gouveia.